Computers Aren’t Clever, but Creative Tools Are Getting Smarter 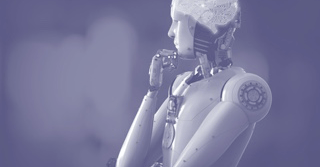 Originally published in The Drum on March 24, 2021

Calm down, creatives. Robots aren’t coming for your job this year, despite what DALL-E might have you believe. AI tools have come a long way in the past decade – they can read documents in seconds, identify the content of images and video, and even generate original assets, but artificial intelligence does not equal artificial creativity. To put it plainly, computers are smart, but they aren’t clever.

Human cleverness is at the heart of the creative process. The ability to synthesise cultural references with product features, to create visual puns or write jokes would take a lot of engineering to approach from an AI perspective. Unlike what science fiction would have you believe, you can’t actually sit a robot down with a Seinfeld box set and expect it to become a comedian – not a good one, anyway. While it’s not an impossibility that AI could achieve the type of unique, out-of-the-box, lateral, nuanced thinking that possesses great creative minds to fill whiteboards with their incoherent brilliance – it’s just not likely to be cost effective, scalable, or available anytime soon.

There are plenty of “smart” tools out there, from bonafide AI to intuitive rules-based decision making tools (such as chat bots), but personally, I wouldn’t trust them to develop my ad concepts or to write social copy. It’s not that they’re not capable, just too rigid to achieve what my clients would actually want. Consider your interactions with AI in the past. I’ve got several voice-activated gadgets in my home, and they often miss the mark when it comes to meeting my needs. Sometimes they give me an answer that’s too complex, such as recommending I read a scholarly article, when I only wanted a fast answer. Or they may provide something too simple, saying that it’s not presently raining, when I really wanted to know if I should bring my umbrella for a day-long outing. For me, the novelty outweighs the potential annoyance of these experiences – but if these were being served to me as a piece of marketing?

We know that AI will make a mistake every once in a while, so whether or not to employ an AI to complete a task boils down to a bit of simple risk-assessment. What if the worst case scenario – like this (hilarious) one encountered by a family using an Amazon Echo or this deeply damaging one in Amazon’s hiring department – happened in your campaign just one time out of 100. Would you be happy if your creative were brand-safe 99% of the time? What if you run 1 million ads? 5 million? That’s a lot of risk. It’s too much risk for self-driving cars, for example, according to AI psychologist Gary Marcus, “But if you made a pedestrian detector that's 99 percent correct that sounds good, then you do the math and think about how many people would die every day if you had a fleet of those cars and it's really not very good at all."

But this isn’t to say that AI shouldn’t have a role in the creative process, in fact, it’s quite the opposite. Ironically, AI creative tools are best suited to the least creative tasks in the process. The experts at IBM Watson agree, ”In the end, the human really is the one being creative, and it’s more about how you can get better efficiencies.”

Think of those grinding, time-consuming tasks you wish you could pawn off on a junior team member; image cropping, banner resizing, cross checking file names against a database, digging through a brand assets folder. This is where you should invite a robot teammate to the party.

That’s exactly the approach we believe in at Ad-lib.io. We’ve developed a suite of tools that help creative teams hammer though the boring stuff. There’s an MIT-based algorithm that helps score assets for memorability, and one that helps ensure your ads are in line with industry-proven best practices. We’ve got a clever bit of code that can resize your background images to fit every display format, and one that makes sure your team uploaded high-res images to begin with. Ad-Lib.io robots can cut down your movie trailer into just the best bits (so you more quickly iterate and test ads). And, while these might not sound as sexy as a “virtual creative director,” it’s an approach that serves our clients well. We’re not reinventing the wheel, but we are making sure no one emails you at midnight to chase after your font files. Welcome to the future.